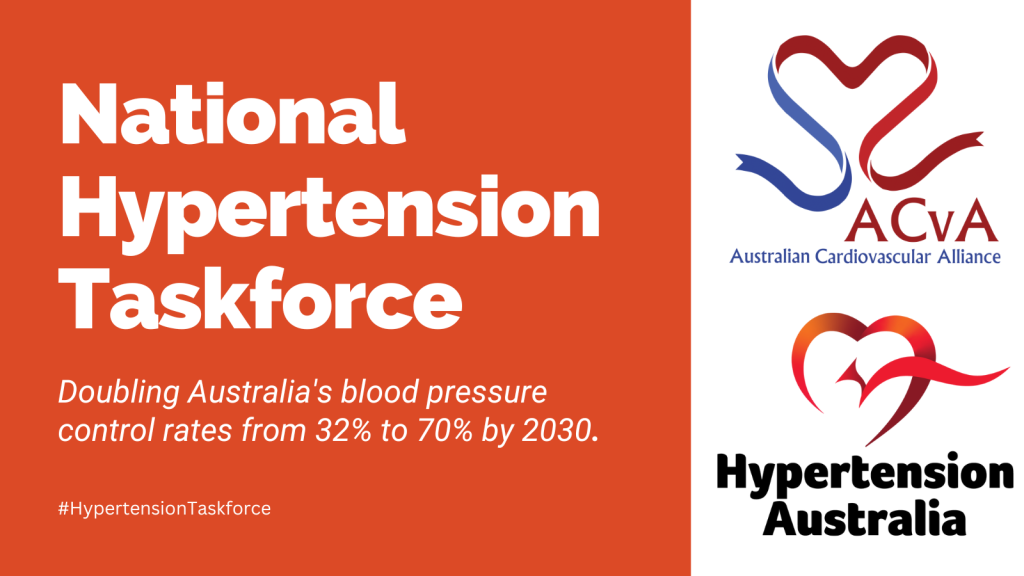 One in three Australian adults have high blood pressure (also known as hypertension) which is the leading risk factor for Australia’s top three killers; coronary heart disease, stroke and dementia.

Over time, this silent killer damages your heart, blood vessels and every part of your body. However, only half of the people with high blood pressure even know that they have it and of those only 32% have it under control.

“High blood pressure control in Australia has fallen well behind other countries which is a great risk to the health of Australians,” says Professor Alta Schutte, co-lead of the National Hypertension Taskforce. “But we can do something to stop this. High blood pressure is a modifiable risk factor which can be controlled to prevent adverse consequences.”

To address this national health problem, the Australian Cardiovascular Alliance (ACvA) and Hypertension Australia (formerly the High Blood Pressure Research Council of Australia) have joined forces to establish a National Hypertension Taskforce with the ambitious goal to double Australia’s rates of controlled blood pressure from 32% to 70% by 2030.

“If all Australians currently living with high blood pressure were properly treated, we could save as many as 83,000 lives,” says Professor Schutte. “Improving these rates in Australia is not only critical but possible. We can and have to do better if we want to save lives.”

The National Hypertension Taskforce, which is being launched on Thursday 8th December with an address from the Honourable Mark Butler MP, Minister for Health and Aged Care, is co-led by Professor Alta Schutte and Professor Markus Schlaich.

It was established as an outcome of extensive international and local consultation by the ACvA. It has membership across the health spectrum including peak bodies, professional societies, clinicians, researchers and consumers with lived experience.

“Successful cross-sector engagement is the major strength of this Taskforce,” says Professor Schlaich. “The focus on management of high blood pressure in the community must include general practitioners, pharmacists, remote health care workers, nurses and allied health. When we come together like this, we can achieve far more than we ever would as individuals. This Taskforce will have real impacts on patients’ lives especially those people who wouldn’t usually be considered at risk of having high blood pressure.”

Kayee Tang is one of those people. Young and fit, he only got his blood pressure checked because it was a visa application requirement.

“I remember they had to bring a secondary blood pressure machine in because they couldn’t believe the result they were seeing,” says Mr Tang. “I was taken in the back of an ambulance to hospital and put on beta blockers for a period of four months, just to regulate my blood pressure.”

Like most people, he didn’t know much about his blood pressure. “It really shook me, that something I was unaware of could have led to a stroke, heart attack or heart disease.”

After many years on medication, it was his involvement in a high blood pressure study which pointed to problems with his adrenal glands. He has since had surgery and is off blood pressure medication.

He applauds the formation of the Taskforce saying, “A lot of people probably assume they’re OK because of their age, physical wellbeing and family history. It’s so important for people to get checked and really understand what their numbers mean and that high blood pressure is a risk factor for so many medical issues. I think it’s vital to have the Taskforce spreading the word.”

“There are so many unanswered questions with cardiovascular disease,” says Professor Gemma Figtree, President of the ACvA. “However, high blood pressure is a clear risk factor that we can actively do something about. Our vision is about uniting the sector to address the biggest areas of unmet need and hypertension is clearly one of them. This collaboration is such a huge achievement. There’s a chance to make a real difference to the health outcomes of ordinary Australians when we come together like this and we are so thrilled to be a part of that.”

The Hypertension Taskforce includes members from the following organisations:

Professor Alta Schutte PhD FESC FRRSAf ISHF is SHARP Professor and Principal Theme Lead of Cardiac, Vascular and Metabolic Medicine in the Faculty of Medicine and Health at UNSW Sydney, Australia, with a joint appointment as Professorial Fellow at the George Institute for Global Health. She is also ACvA Board Secretary (elected at the 2022 AGM), a NHMRC Investigator Grant Leadership Fellow and the Co-lead of the new Hypertension Taskforce.

She has extensive experience in working in clinical and population-based studies with a focus on raised blood pressure, hypertension and cardiovascular disease.

Professor Markus Schlaich is the Dobney Chair in Clinical Research at The University of Western Australia, the President of Hypertension Australia (formerly the High Blood Pressure Research Council of Australia), Co-lead of the new Hypertension Taskforce, and Executive Committee Member of the World Hypertension League,

He is a renal physician and a European Society of Hypertension (ESH) accredited hypertension specialist with a strong background in clinical research. His main scientific interests focus on pathophysiologic aspects of hypertension.

Professor Gemma Figtree is an interventional cardiologist, the President of the ACvA and Professor in Medicine at the University of Sydney. She co-leads the Cardiovascular Theme for Sydney Health Partners, a NHMRC Advanced Health Research and Translation Centre and is the Chair of the University of Sydney’s multi-disciplinary Cardiovascular Initiative.

Kayee Tang is a 46-year-old man. Originally from the UK, he now lives in Perth. In 2007, he applied for an Australian visa and undertook a routine medical test. His blood pressure was so high that he was rushed to hospital. He was on medication for years to get it under control. Through his involvement in a study with Professor Schlaich, he found out that his adrenal gland was the cause. His blood pressure is now stable after having surgery.

They work to bring the cardiovascular research sector together in a whole of pipeline approach, to collaboratively develop solutions to the most pressing areas of need to make a measurable difference to cardiovascular patient outcomes.

Hypertension Australia’s mission is to advance health through the prevention, detection and control of high blood pressure and its complications.

They work across medical and health disciplines and with consumers and policy makers to advance research, professional and public education, and ensure all adult Australians will be screened for elevated BP and receive adequate support to avoid the potentially deadly complications of hypertension.

It was previously known as the High Blood Pressure Research Council of Australia. This transition will be officially launched on Thursday 8th December.